Video Mental Coaching from Anywhere in the World - LEARN MORE!
You are here: Home / Tennis Psychology / Tennis Mental Game / How to Play Confident Tennis Against Your Rival 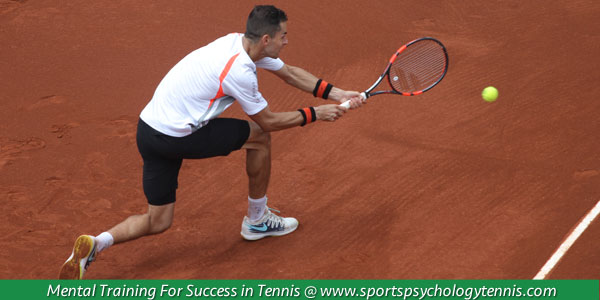 Do You Have Confidence In Your Tennis Game?

Do you have a tennis rival or some player you just want to beat no matter how important the match is?

Do you wonder how you can gain an advantage over your rival and tip the scales of victory in your favor?

Rivalries add another component to competitions… the stakes seem higher when facing off against your rival.

You want to beat your rival not just for the sake of winning the match, but because of the competitive history you have developed with your rival over time.

Think of your biggest rival… You and your rival are probably pretty evenly matched. You have probably had some epic battles and matches that went back and forth.

When you are at similar performance levels, what gives one player an advantage over the other?

Well, if your physical games are similar, it is the mental game that becomes the difference-maker.

The level of confidence you take to the court will affect your approach to the game:

A high level of confidence can give you the mental edge over your rival.

Novak Djokovic and Rafael Nadal’s rivalry is one of the biggest rivalries in modern tennis.

Djokovic and Nadal have played against each other 46 times. In the beginning, from 2006-2010, Nadal had the edge in victories winning 16 matches to Djokovic’s seven.

Lately, Djokovic exerted his dominance winning seven of their last eight matches including a straight set victory against Nadal, 6-3, 6-3 in their semi-final match up at the 2015 Barclays ATP World Tour. With his latest victory, Djokovic has tied the series record with Nadal 23-23.

DJOKOVIC: “In terms of matches played, it’s the greatest rivalry we had in [our] sport because we played 46 times against each other and we still keep on going.”

After the match, Nadal described Djokovic’s performance of recent as “unbeatable.”

Djokovic credits his confidence as the reason he has played consistently well, especially in his rivalry against Nadal.

DJOKOVIC: “I don’t feel unbeatable, but it does definitely feel great when I’m playing the way I played today, when I feel like I’m dictating the pace, the match itself, most of the rallies, I feel like I’m on top of my opponent.”

In his match against Nadal at the Barclays ATP, Djokovic’s confident approach gave him a mental edge in spite of the fact that Nadal was having a great tournament.

DJOKOVIC: “Even though he [Nadal] has played well given the results and the matches he won during the week. I still felt like today I could have done most of the things that I intended to do.”

Confidence frees you up to play aggressively and take the risks necessary to be successful over your rivals.

Tip for playing confidently against your rival:

Confidence comes from past success and preparation. If you hold close to the memories of losing tough matches against your rival, you will approach the next match with apprehension.

The key is to focus on the successes you had against your rival. Even if you lost a match, maybe you had a high first serve percentage or you committed less unforced errors.

By focusing on your successes or improvements, even the minor ones, you will be able to approach upcoming matches against your rival with confidence.