Video Mental Coaching from Anywhere in the World - LEARN MORE!
You are here: Home / Tennis Psychology / How Wozniacki Overcomes Halep 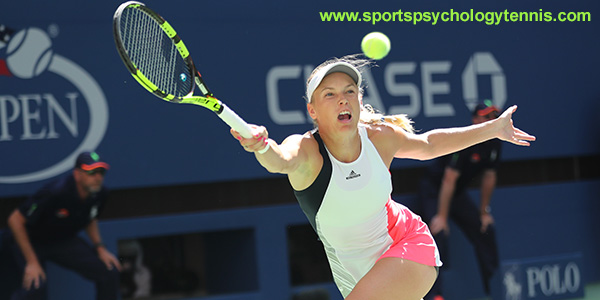 Winning The Mental Battle in a Match

Winning the mental game can be the difference-maker in tough, long matches.

By being mentally prepared and mentally tough, you can swing the momentum in your favor and grind out victories, even when you are slightly off your technical game.

In sports, there is a term often cited named “war of attrition.”

War of attrition refers to the mental fortitude and mental toughness that is critical during highly contested matches.

War of attrition is the battle where the winner is the player that outlasts their opponent.

War of attrition consists of battling through, wearing down your opponent and grinding out a victory under stressful or difficult conditions.

In tennis, the winner is not necessarily the one who has the most powerful serve… or the player who is ranked the highest… or the quickest athlete on the court.

The winner of a match is often the mentally tougher player, the player that wins the battles in the trenches.

The mentally tougher player, the one who wins the war of attrition, is the one who battles through all the obstacles inherent in those long, hard-fought matches and pulls out the victory.

Caroline Wozniacki won the war of attrition by grinding out the victory at the 2018 Australian Open for her first Grand Slam championship.

Wozniacki beat Simona Halep 7-6 (2), 3-6, 6-4 battling back from a 3-6 third set to capture her first major in 43 attempts and putting her atop of the tennis world for women.

Wozniacki was last ranked No.1 in the world six years previously which ranks as the longest gap between stints atop the game.

The championship match was not easy.

Not only did Wozniacki battle back from being down 3-4 in the third set, she won the last three games, 10 of the last 14 points and earned her first Grand Slam title.

WOZNIACKI: “Every time, I was like, ‘Oh, I can’t do this anymore. I’m exhausted.’ And we were playing all these crazy-long rallies. I’m looking over there and she [Halep] looks a little tired. She must be feeling the exact same way or maybe more tired than me.”

That’s winning the war of attrition… That’s outperforming your opponent on the court and winning the mental battle as well.

And the victor, the winner of the war of attrition, is the player with the most amount of mental toughness.

A Tip for Winning the War of Attrition:

In highly contested battles, everyone has to deal with similar circumstances: hot weather, being tired, pressure, the crowd, etc.

Remind yourself that the last person standing in usually the winner.

Use the cue, “Outlast,” “Win this battle,” or, “Stay mentally tough,” to remind yourself to persist and win the war of attrition.