Video Mental Coaching from Anywhere in the World - LEARN MORE!
You are here: Home / Tennis Psychology / Surprise! Federer Doesn’t Always Have His A Game 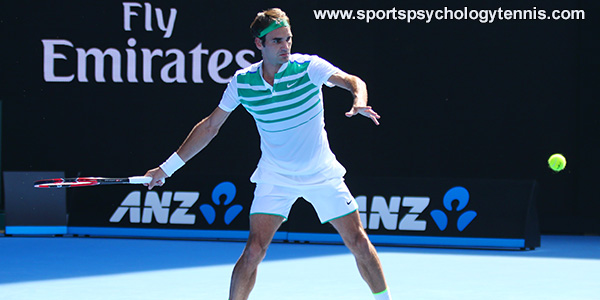 How to Play Functional Tennis And Win Ugly

Do you feel like you always have to play with your A-game?

Do you want to constantly feel “good” when you play?

After a loss, are you able to move on and accept that today just “was not the day?”

Tennis star, Roger Federer recently lost to Kevin Anderson in Wimbledon, with scores of 2-6, 6-7, 7-5, 6-4, 13-11. Federer won the first two sets and commented that he felt great throughout the first set.

After the second set, Federer believed he continued to play well and compete, even though it did not “feel” as good as the first set.

After his early lead and what seemed like controlling the match from the start, Federer lost his last three sets.

Reflecting on his performance, he said:

“I wasn’t feeling particularly well off the baseline. I couldn’t really get the rallies going the way I wanted to, especially 1-2 punch wasn’t working at all today. I don’t know if it had something to do with the breeze, just a bad day from my side, except the first set. After that, I never really felt exactly 100%. That has nothing to do with my opponent. It was just one of those days where you hope to get by somehow.”

“Sometimes you don’t feel good, and you try your best. I don’t know. Sometimes you feel better, and you still try your best. Today was one of those days. I think it went in spells a bit also, how I was able to return his serve. I had moments where I was great, I felt like I was reading his serve, other moments where I don’t know where the hell I was moving to. I don’t know if that was his serve. But I also have a feeling, it was a feeling of mine, you know, not getting it right.”

As Federer mentioned, his play came in spells. He was doing great and would then be challenged by Anderson’s serve.

That’s how the game of tennis is played.

You ride the momentum wave while it lasts and continue playing through the highs and lows.

It is common that athletes become frustrated, lose their composure, and struggle to stay in the moment when a match is up and down like the one between Federer and Anderson.

The match-play may continue to be inconsistent, however, you put yourself at an advantage when you are able to remain stable mentally.

When asked about his mental game and whether or not he got mentally fatigued, Federer said:

“No, I felt good actually. Sure, it’s disappointing losing the next two sets after winning the first two and having match points. I’ve been there before. I know what kind of energy I need to bring to the fifth. I was able to bring that. To be honest, I didn’t feel mental fatigue.”

Federer lost the fifth set, but with his composure and overall mental strength he was able to bring the intensity he needed to finish strong, win or lose.

Even through the third and fourth sets when Federer struggled to beat Anderson, he felt that the way he was playing was good enough to win the match.

“Off the baseline I wasn’t feeling as good as I had hoped to, but still good enough to be in there and maybe win the match. I wasn’t too concerned. Even at 10-All in the fifth, it’s all good. I still felt like all he needed to do was give me a few second serves, finally pick the right sides again, things could change. I wasn’t – how do you say – horribly negative the whole game.”

Federer understands that you win some and lose some, and you are not always going to play your best. You will play average a lot of days, not great. On those average days, you have to figure out a way to keep playing and finish strong, like Federer.

You will play average a lot of days, not great. On those average days, you have to figure out a way to keep playing and finish strong, like Federer.

He said: “First set felt great. Reading the serve. He wasn’t getting many aces. When I was on, I was making him play. From the baseline I felt like I could mix it up, play aggressive. There was a lot going on. As the match went on, I couldn’t surprise him anymore. That’s a bad feeling to have. It’s not like it hasn’t happened before. I’ve been in many, many matches like this.”

Federer has played average many, many matches, as he mentioned.

Sometimes he has come out on top and others, such as the match against Anderson, he was not able to get the win.

That’s the game of tennis.

Federer accepted the loss after the match. But he never lost focus, composure, or trust in his ability to compete with Anderson on the No. 1 court in Wimbledon.

As Federer articulated, sometimes it is just not the day, whether you play well and feel good or not.

However, you must continue to believe in and trust what you have that day, no matter if it is great or average.

Also, you must understand that you won’t always have your “A” game when you compete.

You have to learn how to scrap out a match and win ugly, as Brad Gilbert would say.

Federer lost at Wimbledon this year. It might take him “half an hour” to get over the result he said, and he will be back in London next year.

Learn more about how to play functional tennis and win ugly with Tennis Confidence:

Maggie had such a great weekend. As always, after she works with you she just seems more grounded and focused. She’s less likely to look around and get distracted during her match. She’s more focused on one point at a time. Also, as a parent, I’ve learned to encourage her process goals and not outcomes. Consequently, she played well and won her first doubles match, upsetting a seeded team in a really really close match!”
~Katherine Johnson Cannata, Maggie’s mother