Video Mental Coaching from Anywhere in the World - LEARN MORE!
You are here: Home / Tennis Psychology / How Sharapova Played to Her Comfort Zone 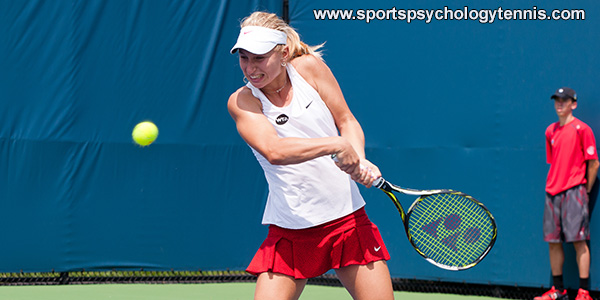 Have you ever been up in a match and unable to finish?

Do you sit on your lead and try to protect it?

Have you been the “favorite” and expected to win… and lost?

This scenario is quite common in tennis, and essentially all sports.

Players or teams get ahead, start playing too carefully or “not to lose,” and end up losing.

Maria Sharapova recently lost in the first round of Wimbledon, for the first time ever.

She went ahead much of the match, though each lead disappeared just as quickly. Sharapova’s collapse finally ended with her 11th double fault.

Previously, Sharapova was 49-1 in openers at a major tournament, and 13-0 at Wimbledon. She was a No. 1 seed and has won five Grand Slam titles.

Her opponent, Diatchenko, was 8-25 in main-draw matches at all tour-level events and 0-2 at Wimbledon.

Diatchenko said: “Everybody expects me to lose the match.”

Sharapova was ahead many times throughout the match and expected to win, though she wasn’t able to finish.

When tennis players are up and dominating, they sometimes try and hold on to their lead by playing it safe, trying to avoid errors.

As athletes slip into this comfort zone, they stop playing the way they were when they got into the lead.

Tennis players in a comfort zone stop attacking and stop trusting. Being aggressive and playing confidently is what helped them get ahead. When they break their play, the game changes for them.

As you play less assertively in a match, your opponent takes advantage of the opportunity.

Also, being “expected” to win can add pressure, no matter the occasion. It was assumed that Sharapova was going to win, and expected that Diatchenko would fold.

Sharapova may have entered the match with that same mindset, adding a weight to her shoulders to play more perfectly.

If you find yourself with a lead, like Sharapova, remember what got you in the lead.

Play that way all the way through. Stay aggressive, trust your skills, and play one point at a time. Start strong and finish strong.

Additionally, let go of any expectations you feel entering or even throughout a match. This can add a burden to play perfectly.

To learn more about improving your mindset in matches, check out our “Tennis Confidence” audio and workbook program:

“I have really enjoyed listening to your tennis psychology podcasts on iTunes and reading your E-books. I already have improved in my mental game. I played in a tennis tournament this past weekend and played with the amount of confidence I should have in myself. If I lost a point or made a stupid error, I knew how to deal with it and move on to the next point. I didn’t get frustrated.”
~Melanie Lewis, Junior Tennis Player