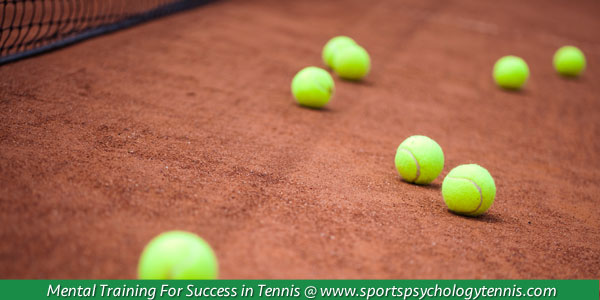 OK, my daughter – age 10 – and I were practicing this week to prepare for a local USTA tournament. I got frustrated one day with her lack of motivation and inability to focus during practice.

My philosophy: Do it right or don’t do it at all.

But I forget: Young kids have difficult time focusing in practice when they don’t have enough fun or feel challenged. You know, Dad can be boring!

I can tell right from the start of practice that she was not going to focus or try – as if she did not want to be at practice. She wanted to go back to watching Hanna Montana. Dad was boring her to death…

Tennis kids have a hard time understanding the relationship between focus in practice and their performance in matches. But I know better… It’s not enough to show up, you have to practice with the same intensity, focus, and effort that you would give in a tournament.

We call this practice specificity in sports psychology for tennis. You want your practice to match the intensity and focus required to play well in matches.

The closer you can make your practice to match situations, the more effective practice is. But I don’t think kids understand this relationship because they just want to have fun with friends and play games – at least this is my daughter’s orientation in tennis. She has to be excited about something to get her head in the game.

I cannot motivate her to focus in practice if she does not want give 100%. Maybe that’s why I get frustrated at times. I tried to tell her that everything she does in life, not just tennis, should be with full focus and effort.

Why give anything less?

So, I pulled out a “contract” we put together stating that he would give 100% focus and effort in her tennis practice. In return, I would treat her to an occasional smoothie or ice cream after practice. I reminded her we had a deal together.

We also discussed the idea that she should hit shots in practice as if she was playing in a tournament. She’s usually motivated and focused for tournaments.

“But it’s just practice, not a match.”

I guess she didn’t understand my point about practicing with the same intensity as a match.

For this reason, you have to involve kids in play and games instead of just drilling them on the perfect forehand. Kids get bored quickly with “drills” if they do not have an outcome or game component to the drills.

I was able to cap a parental urge to push my tennis kid beyond what she was able to do that day, but learned a valuable lesson:

Tennis kids must be self-motivated, have personal incentives to play, and push themselves towards success.