Video Mental Coaching from Anywhere in the World - LEARN MORE!
You are here: Home / Tennis Psychology / Conversations Can Change Your Mindset on the Court 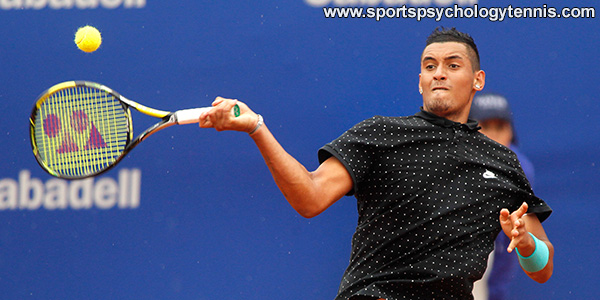 How to Improve Your Self-Talk in Tennis

I’m certain you’ve gotten down on yourself at some point during a match….

Even after the match, the negative self-talk continues…

“What is wrong with me? My serve is horrible. I can’t win a set. All I do is mess up. I don’t even know why I play anymore.”

The biggest problem with negative self-talk is that affects your level of effort.

When you say to yourself, “My serve stinks,” it’s likely you will hit the ball with less pace and your opponent will smash it down the line for a winner…

When you tell yourself, “I’m a horrible player,” you will half-heartedly go after balls…

When your think, “All I do is mess up,” you will lob the ball over the net instead of going for winners.

When you tussle with negative thoughts, your hustle will suffer.

Case in point, Nick Kyrgios’ second round match at the 2018 US Open.

Kyrgios, who lost the first set and was down 0-3 in the second set, let two serves pass him and reportedly threatened to quit the match.

Kyrgios is an emotionally volatile player whose attitude and lack of effort have been questioned by many in the tennis world.

Curiously enough and without getting into the ethics of the situation, the umpire gave Kyrgios a bit of a pep talk that may have helped Kyrgios turn things around and win the match 4-6, 7-5, 6-3, 6-0.

The umpire’s words of encouragement are something that may have affected Kyrgios’ self-talk and level of effort, “I’ve seen your matches: you’re great for tennis. Nick, I know this is not you.”

As Roger Federer said about the incident:

“Conversations can change your mindset.”

Kyrgios’ performance improved because the message changed from negative to positive. You don’t have to wait for a pep talk from someone else to change how you play the game.

That is the reason it is called self-talk.

By sending yourself positive messages via self-talk you can shift momentum and regain control of your mental game.

Strategy #1: Give yourself a positive pep talk… “Let’s go! Get this point. I’ve comeback before. It’s time to take charge!” The message you send to yourself can keep your motivation, energy effort at high levels.
Strategy #2: Reboot your mental computer. Hit the reset button. Take a few deep breaths, bounce on the balls of your feet, hit your racquet strings a couple of times then say, “Focus on this point.” By changing your focus to what is important, you won’t get dragged down by negativity.

For more strategies on improving self-talk and boosting your tennis game, check out our audio and workbook program, “Tennis Confidence”: