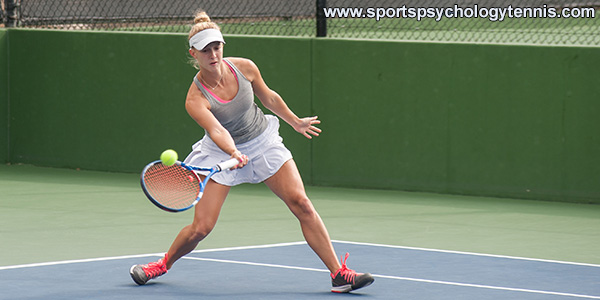 Strategies to Push Through Fatigue in Matches

Do any of these words describe a match you recently played?

How did you handle playing with fatigue?

Were you able to dig deep and find a way to keep competing for every point or did you succumb to the tired feelings and slowly watch your game slip away?

There is no doubt that tight matches, long matches, several matches with minimal rest or grueling matches can be quite exhausting.

Feeling exhausted is as much mental as it is physical.

When playing in long, competitive matches, your inner voice can be your toughest opponent, “I’m too tired. My arms are heavy. My heart feels like it is going to jump out of my chest. I just want this to be over.”

These negative reminders add to that sense of fatigue you feel.

That negative chatter becomes quite convincing to the point where the only thing you can focus on is the fatigue you are experiencing.

When you are fatigued, the answer is not trying to convince yourself that you are not fatigued…

The key is to convince yourself that you can play at a high level despite being tired.

When it comes to grueling matches and fatigue, there are several realities:

Tennis player Kiki Bertens refused to allow fatigue to detract from her game at the 2018 Western & Southern Open.

Bertens was one point away from losing during the second set but she rallied to win the tiebreak and pull off the biggest win in her career.

While talking to her coach Raemon Sluiter, Bertens caught herself thinking about the fatigue she was feeling, then refocused her attention on competing.

BERTENS: “I think it was such a tough match, and after winning that second set I knew anything is still possible. Just keep on going. And then I had a chat with Raemon at 2-1 and I was, like, I’m dead. He’s, like, looking at me. Then I said to myself, No, I can do this. Let’s go for it.”

In her post-match interview, Bertens revealed how she was able to get past the fatigue factor and regain her focus with the help of her coach.

BERTENS: “Raemon also just said, That’s why you put all that hard work in. I was, like, Yeah, I know this feeling. I had this feeling before in the practices. So I know that I can keep on going. It’s for a title, so of course you can always give a little extra and just go for it. And that’s what I did.”

Pushing past the exhaustion and keeping her mind focused on the goal of winning rather that of just being “done” was the key in helping Bertens pull out an amazing victory.

Challenge yourself in your training sessions. Make those sessions have a purpose. Train harder than you compete. Be ready to stay in long point and long games.

When you’ve battled through fatigue in practice, you’ll be ready to battle hard in those same conditions during matches.

When you think you can’t go another point or game, remind yourself of Mahut and Isner match in the 2010 Wimbledon with a final set of 68-70!

For more strategies on building mental toughness in tennis, check out our audio and workbook program, “Tennis Confidence”: