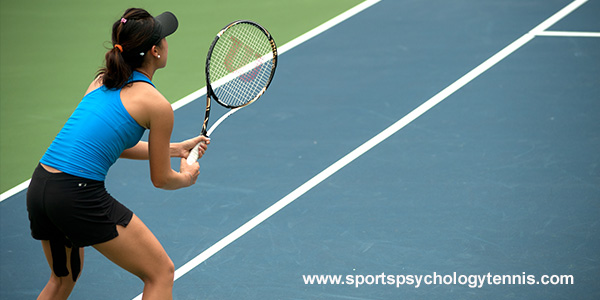 It’s important to understand what destroys a young tennis athlete’s mental game and confidence. Here are some quotes from kids and teens about what undermines their confidence or their belief in their abilities:

“The major problem is my parents,” says Lauren, a 12-year-old who plays soccer, Lacrosse, basketball and tennis. “Dad’s cheering embarrasses me. Just before I shoot in soccer, he yells, ‘Pull the trigger!’ It’s so awful.”

“I’m naturally not good at sports,” says Robbie, age 12, who fences. “I don’t have the right body. I’m weak, have no muscles and can barely lift 10 pounds.”

“I wonder if I am going to shoot a good round of golf before I start. I doubt I can stack up to the competition and if I am good enough,” says Erica, age 15,

Generally, junior tennis players say they have a better mental game and feel more confident when they:

Tennis kids’ confidence and mental game of tennis is linked in large part to the kind of “input” they give themselves or receive from coaches, parents, or teammates. It’s also affected by their past performances. Here are tennis kids’ top five confidence killers:

2. Being a perfectionist
Perfectionists cripple their confidence by expecting to have a perfect match, experience a mistake-free performance or win the match 6-0, 6-0. Such accomplishments are rare in tennis, but perfectionists aim for them.

Perfectionists are hard on themselves and criticize their slightest mistakes. They analyze each point in minute detail, focusing on their bad racquet preparation, terrible footwork and horrible shots. They have a hard time enjoying tennis because they’re so determined to perform without making mistakes.

3. Harboring self-doubt
Young tennis athletes who doubt their abilities are often nervous, anxious or fearful. That’s not to say that even top athletes experience doubt at times. Young tennis athletes whose self-doubt hurts their confidence may feel inadequate, unable to perform when others are watching–such as a coach, parent or official- inferior to the competition, or may become hesitant when faced with adversity or opposition. For example they may become nervous when they must win a third set or tie break to win the match.

4. Holding on to negative feedback
Some athletes are particularly sensitive to negative feedback from parents or instructors. They hold onto it and it turns into their own negative voice inside their head. They might tell themselves, “Everyone thinks I stink, so I must stink.” They may do this after a coach focuses only on their mistakes, when parents point out only the down side of their performance, or when opponents criticize them.

5. Failing to believe in self
When young tennis players don’t believe in themselves, they question their ability to perform. They ask themselves, “Did I practice hard enough this week?” or other questions. Self-doubt is the most damaging to an athlete’s confidence. For example, some young athletes doubt their ability to execute a backhand down the line but still manage to hit the shot they had intended. Athletes who don’t believe in themselves often have defeatist attitudes and use negative labels to describe themselves such as “I can’t finish off my tennis matches.” They wonder why tennis is worth the effort, since the outcome will likely be failure.

In my next article, I’ll discuss other confidence killers for junior tennis players and their mental game.