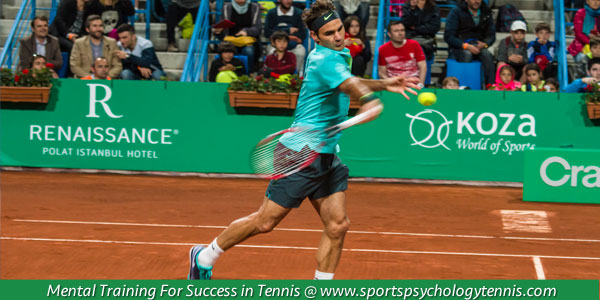 How Can Federer Improve His Mental Game?

What’s a better mindset for Federer that will help him win again against Nadal after his demoralizing, heartfelt loses in the Australian Open?

I’m revisiting the psychology of tennis lessons we learned from the Australian Open finals. The momentum shifts of a final match, such as Federer and Nadal in the 2009 Australian Open, are interesting to watch from a mental game perspective.

As a mental game expert, I try to peer into the psychology and momentum of a match.

If you have read my articles at Sports Psychology for Tennis, you know I think Federer defeated himself with some faulty thinking in the fifth set during the Australian Open finals.

After the match, he said the match should not have gone five sets. He also thinks that the better player does not always win because it comes down to momentum and who has the momentum at the end of the match. True, but:

Can thinking his opponent has stole all the momentum be enough to cause him to tighten up in the final set?

You could see Federer tighten up in the fifth set and make more mental errors.

Did the pressure to win cause Federer to tighten up and make more errors in the final set?

Yes, I think Federer choked the match away when Nadal grabbed some momentum in the match.

Here’s my mental game of tennis summary outlining why Nadal beat Federer (or why Federer beat himself!):

I do think Federer beat himself, especially in the final set. But I don’t want to take anything away from Nadal’s heroic performance. He played a great tactical and mentally tough match. Nadal could have folded earlier in the match when Federer had all the momentum, but he held strong.

How can Federer improve his mindset or mental game for future success against Nadal?

1. Focus on the future and not the past. Nadal leads Federer 13-6 head to head from 2004 to 2009. From 2008 to present, Nadal has won all five meetings. The last match Federer won was the semifinals of the 2007 Tennis Masters Cup. Federer has it in his head that he can’t beat Nadal no matter how good he plays. He must approach each match without the history being a monkey on his back.

3. Play a functional match instead of a perfect looking match. Federer has perfect-looking, flowing groundstrokes, but perfect stokes does not win matches. Good (functional) strokes, good tactics, and mental toughness wins matches. He should play the shots that get the job done in the match rather than stick to what he thinks looks pretty or feels perfect to him.

5. Win with your best shots, not winners on every serve. This concept is similar to playing functional tennis instead of perfect tennis. When players think they must hit winners on every serve (be perfect) to win matches, this causes them to tighten up and over control their performance. I think a better goal for Federer would be to improve his first serve percentage against Nadal instead or try to hit aces every service.

One note here: I based this article on what I can observe in matches and what I read in the post-match interviews. If I could talk to Roger, I’m certain I would have a longer or more accurate picture of how his mental game of tennis may be holding him back and what changes would help.

What changes in Roger’s mental game would you suggest?

Your comments are welcome.