Video Mental Coaching from Anywhere in the World - LEARN MORE!
You are here: Home / Tennis Psychology / Are You Ignoring Mental Training For Tennis? 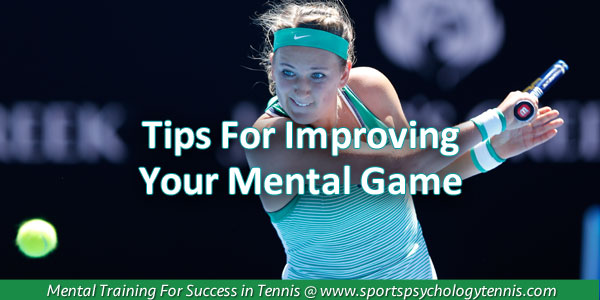 Are you at a plateau in your tennis game?

Are you frustrated with not seeing improvements in your tennis game after hours and hours of additional practice and training?

Many tennis players look to get an edge over the competition and turn to a variety of physical solutions:

Tom is ranked in the top-20 in the College Rankings but his goal is to break into the top-10. Tom is an aggressive serve and volley player with a lot of power but when he plays higher ranked opponents, he melts down and he tends to play points safe.

Unhappy with his lack of improvement, Tom looked for ways to get over the hump. Tom hired a private coach and spent hours and hours of practice trying to master his technique so he could match up better against these higher ranked players.

While his technique improved slightly, the results were the same. Tom was frustrated with his performance but went back to the drawing board, this time hiring a strength and conditioning coach.

Tom ran ladders, did countless burpees and worked on his core until his abs ached. Tom definitely became stronger but still under-performed in matches. Tom’s frustration hit new heights and he wondered if there was any possible way to climb the college rankings.

Unfortunately, tennis players often just look to physical methods to improve their games when the solution often lies in a stronger mental game.

Dealing with pressure, overcoming adversity, bouncing back from unforced errors, competing against tougher competition, pushing through that tired feeling at the end of a match, and managing emotions are all mental components of tennis…

And no amount of physical practice will improve your mental game.

Kyrgios’ talent is undeniable but his “tanking”, unsportsmanlike conduct, meltdowns and outbursts are well documented. Kyrgios’ inability to mange his on-court emotions has slowed his ascent in the rankings.

In an attempt to climb into the Top-10, Kyrgios hired strength and conditioning expert Martin Skinner after injuries forced him to withdraw from the US Open.

In 2016, Kyrgios won three ATP titles but his epic meltdown continued and his “lack of best efforts” at the Shanghai Rolex Masters earned him a $16,500 fine and an eight week tour ban.

In exchange for a reduced suspension, Kyrgios reluctantly agreed to see a sport psychologist which he feels has been beneficial.

KYRGIOS: “I’ve been doing that (seeing a sports psychologist) and it’s actually been good… It just gave me time to think about and analyze everything I’ve got to get better at.”

Sport psychologist Jeff Bond commented on Kyrgios’ need to learn how to manage his emotions if he is to achieve his goal of breaking into the Top-10.

BOND: “Tennis is such a mental game. The whole circus is a mental game, not just being out there with a racquet in your hand.”

If you think a stronger mental game will benefit you then work your mental game, instead of spending your time trying to solve mental issues with physical solutions.

Tips for Improving Your Mental Game

Like Kyrgios, you can consult with a Mental Game Coach to learn proven strategies to improve your mental game.

Learn all my secrets for mental toughness strategies in tennis!