Video Mental Coaching from Anywhere in the World - LEARN MORE!
You are here: Home / Tennis Juniors / Expectations And The Mental Game of Tennis 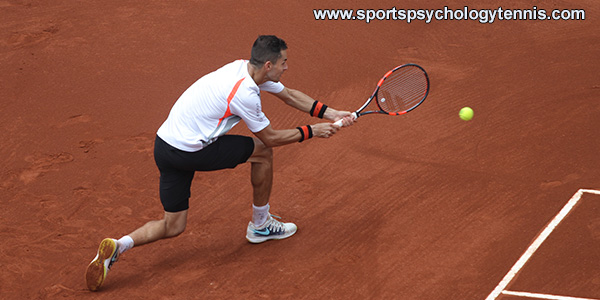 High expectations can cause athletes to question their ability, avoid making mistakes and under-perform.

Let’s take a look at Jon, a 12-year-old tennis player who often begins matches telling himself that he has to hit forehand winners and win the match without dropping a game, in addition to winning 100% of net points won and break point chances. His coach often holds similarly high expectations for Jon, which he quickly adopts as his own.

If Jon begins a game by missing a few shots and losing points, this can destroy his mental game and tennis confidence because he thinks he is under performing. He starts playing more tentatively, worried that he’s going to make even more mistakes.

He gets frustrated, then begins to try too hard. He keeps trying to make “perfect” shots. But he feels controlled and tight. He feels like a failure because of his overly high expectations. He needs to play in the moment more and rely more on his natural ability.

Not only does Jon have to cope with the expectations he imposes on himself. He must deal with his coach’s expectations. Once his coach starts pointing out mistakes or pressuring Jon to hit winners, he freezes up even more. He starts focusing on avoiding mistakes—avoiding hitting the ball out, for example.

Not matching his expectations, Jon gets frustrated, and doubts his abilities. He begins to wonder how he’s ever going to return his opponent’s shots. He starts punishing himself for not performing up to his expectations. End result: He sinks his own mental game of tennis!

Instead of indulging in such negative thinking, Jon needs to think about his positive qualities: his strength, his coach’s belief in him, his hours of practice and his ability to win points in the past.

Remember: if your tennis junior has strict expectations, fails to meet her expectations, and begins focusing on her errors, she crushes her self-confidence and thus her mental game of tennis.

Jon’s self-confidence would not sink so quickly if he entered the match with no expectations about how he SHOULD perform. Jon’s coach and parents could help him by telling him to forget about the score or his statistics and focus on executing shots or his strategy. They should help him play “in the moment.”

Jon should look at the ball and hit the ball without attempting to make a perfect shot or without trying to avoid an unforced error. He should react to the target and trust himself.

He should also focus on what’s happening right now—not on the score or the win. Jon could concentrate on playing one point at a time, or staying committed to his match strategy. His coach could also remind him to focus on these small objectives or mini-goals, rather than on the score.

As parents and coaches, you can keep an eye out for tennis kids with high expectations. They often:

Parents and coaches need to help these young tennis athletes set small, manageable goals and reward them when they achieve them. You’ll find that your kids’ mental game of tennis should improve.