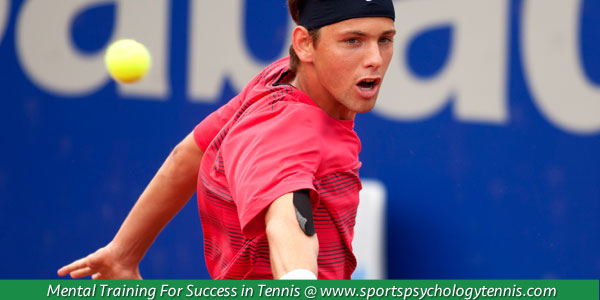 I find that younger players with less tournament experience struggle with their emotional control more so that veteran players on Tour. With maturity and greater mental toughness comes increased emotional and mental control on the court.

Even Roger Federer early in his career would lose his composure on the court. But he’s learned to stay calm on the outside and inside as his mental toughness has matured with his experience and wins.

He can see it in his opponents, which might turn into his advantage:

“I don’t get the anxiety during a match so much anymore. You know, to throw racquets, to toss balls out of the court, scream and stuff. I almost laugh [on the inside] about it a little bit today when an opponent does it. But that’s something for me that’s not a problem any more.”
~ Roger Federer

However, he does demand more of himself in practice and his frustration comes out. He lets it show in practice.

You might argue that it helps him get up for practice and make changes. He does not like to show his anger in tournaments for more than one reason. He wants the respect of his fans and does not want to embarrass himself:

“But in practice that comes out much more often, you know, the frustration, let’s say, disappointment, and the anger and stuff. But, I don’t know, it’s just something that’s gone away over time. And I think, on the match court, it’s just a respect for the fans sitting there and not embarrassing myself, you know, in front of millions on the TV, as well.”
~ Roger Federer

He’s also concerned about kids who watch him play. He wants to set a good example for young kids in tennis even though he enjoyed – on some level – watching McEnroe throw racquets and get upset at officials:

“And maybe kids watching, as well. I want them to have a proper example. Even though I enjoyed watching Goran, McEnroe, these guys throwing racquets. I thought it was funny. But at the same time, I don’t think a tennis player needs to act this way. I think there are different ways, I hope, that kids get inspired other than throwing racquets.”
~Roger Federer

One thing I find interesting about Federer’s mental game based on the quotes above is how much he thinks about embarrassing himself and the image he portrays to kids about his behavior on the court.