Video Mental Coaching from Anywhere in the World - LEARN MORE!
You are here: Home / Tennis Psychology Articles / How Perfectionism Hurts Your Mindset for Tennis 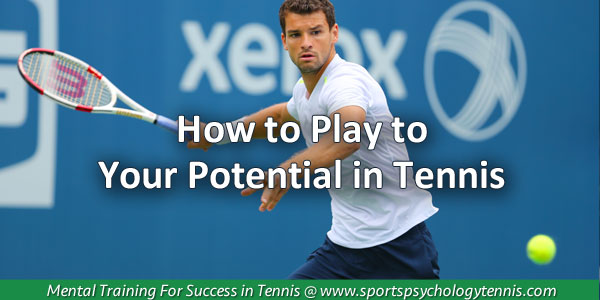 Using a Growth Mindset to Improve Your Game

Despite that well known fact, some tennis players are too focused on hitting perfect shots and not missing.

Think of that proposition for a minute… Some tennis players think if they are not performing perfectly, then they are not playing well.

Has any match you played ever been perfect?

You might point to a perfect game in baseball or a perfect score in gymnastics or break a world record, but does that truly indicate that the performance was perfect.

So, the only outcome that can exist for a perfectionist is not performing up to one’s expectations.

For a perfectionist, competition is truly is no-win situation.

You don’t need to be perfect to advance in tennis or become a successful tennis player.

What do perfectionists have to do to play better tennis and enjoy the game?

A more effective method to reach your potential is to have a growth mindset.

A growth mindset focuses on improvement or developing your game on a continued basis.

When you have a growth mindset, you focus on the process instead of the result. A loss or a mistake is lesson that can help mold future success instead of an indictment that you lack talent.

Grigor Dimitrov enjoyed a very successful junior career and even held the world No. 1 ranking. Since turning pro, Dimitrov has been trying to ascend the rankings on the men’s tour.

Dimitrov has been focused on getting better each tournament and his growth mindset has paid off. Not only did Dimitrov reach his first ATP World Tour Masters 1000 final in Cincinati, he won the title by defeating Nick Kyrgios in straight sets, 6-3, 7-5.

Prior to the final, Dimitrov talked about his mindset and focus on the process.

DIMITROV: “For me, right now is just all about just going step by step and just building up not only my confidence, my game, to be able to do that pretty much every time I’m entering a tournament… Hopefully tomorrow [Cincinnati 1000 final] is going to be one of those days that I can, again, produce good tennis. But not only that, I just kind of want to make sure that I’m going in the right direction.”

Think of it… If you keep focusing on the process, working on your game and trying to get better each and every day, the progress you will eventually see will be staggering.

How to Play to Your Potential:

I teach perfectionists how to play functional tennis and strive for excellence instead of demanding perfection.

First, give yourself three mistakes per set when you play–knowing that you will miss some shots and that’s part of tennis.

And always remember, success is not an all-or-nothing proposition. Evaluate your game based on a scale from 1-10 instead of your game being good or bad at any moment.

Learn how to cope with perfectionism and improve confidence with Tennis Confidence Audio and Workbook program:

“She did really well with controlling her emotions during the matches today. We were very proud of her for not showing her frustrations during the match; I think that was a big accomplishment. She really looked in control of her emotions even when she double faulted or made mistakes. The changes we saw in her behavior in less than 24 hours were AWESOME! Thank you for your guidance!”*
~Jennifer, Tennis Parent

“Thank you for all the knowledge, tools, material, and guidance you have given me throughout the MGCP course. It was truly a great experience. I am looking forward to integrating your mental training system to students at the club, as well as to athletes that truly are committed, and strive towards reaching their peak performance.”*
~Tim Whitehead, Tennis Coach

“On behalf of all of our coaches who attended the 2004 ITA Coaches Convention, I would like to thank you for serving as a featured clinician. I know that the coaches felt it was both enjoyable and informative. We greatly appreciate your taking the time to prepare and present such an outstanding clinic for the benefit of our coaches.”*
~Nancy Breo, ITA Convention

“Dr. Cohn did a great job working with my son Joe on his mental skills for tennis. He taught him the mental skills and discipline necessary to move to the next level. Thanks Doc!”*
~Mike Withers, Joe Withers Father

“Maggie had such a great weekend. As always, after she works with you she just seems more grounded and focused. She’s less likely to look around and get distracted during her match. She’s more focused on one point at a time. Also, as a parent, I’ve learned to encourage her process goals and not outcomes. Consequently, she played well and won her first doubles match, upsetting a seeded team in a really really close match!”*
~Katherine Johnson Cannata, Maggie’s mother

“Since you last worked with AJ in early September, his National ranking has improved from 349 to 148. His tournament record at one point, since talking with you was 17-4, with 3 of the 4 being in third sets or tiebreakers and 2 of those matches being the same player, whom he has since beaten (you may recall he was on an 0-9 losing streak when we contacted you). His tie-breaker record is at least 90% through last weekend when he won the 18s District tournament with a semi and final match tiebreak win. Your help has definitely improved AJ’s results and his on-court demeanor has substantially improved.”*
~Dawn Woodman, A.J.’s Mother

“I want to let you know that your “Tennis Confidence” CD program has been extremely helpful to me. I listen to the CDs in the car and the program is helping me overcome a lifetime of tournament performance Anxiety. Thank you!”*
~Wing Yu, Tennis Player