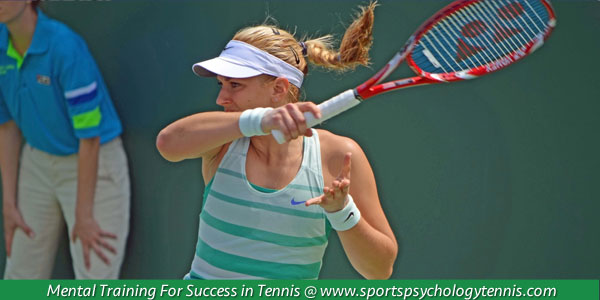 “I like winning more than I like losing…”, Maria Sharapova said during an interview this week at the Australian Open.

Not only is Maria Sharapova currently #2 in the world for tennis, she is one of the most mentally tough tennis players on the WTA. This week, she is competing in the Australian Open and is currently in the semi-final rounds.

On Tuesday, she played against Eugenie Bouchard and won in two sets 6-3, 6-2. Coming in to this match, Sharapova knew that Bouchard would be ready for her.

When asked about what she expects from Bouchard’s performance, Sharapova had an idea of what she would face in the match.

SHARAPOVA: “She’s been playing really well in this tournament and also in the slams the last year. Really confident tennis and inspired form. I expect her to come out and play a really good match. I think we only played each other one time last year, which was at the French. That was a really tough match for me. I had to come back from being down one set to Love. Yeah, I’m sure she’ll come out and play extremely well.”

SHARAPOVA: “She’s a pretty aggressive player. She stays really close to the line, she likes to dictate the points. Yeah, I feel that’s where she’s hurt a lot of players and been really successful.”

This pre-match chatter from Sharapova is on purpose…

Sharapova uses what she knows about her opponents to mentally prepare herself. This helps her be sharp and ready for the challenge. She take no opponent lightly.

She knew going into the match that Bouchard would attempt to control the points and Sharapova had the answer.

Mental toughness is one of the most important skills you can have as a tennis player. Sharapova’s mental toughness has helped her to play well under pressure and to dominate strong opponents.

When playing strong opponents, remember to prepare yourself mentally for the match. Know your strengths as a tennis player and use those to your advantage on the court.

Focus on what you bring to the match and how you can control the points. Don’t allow yourself to dwell on the strengths of the opponent.

SHARAPOVA: “You can’t ever underestimate their potential and how they can play. They’re going to fight till the very last point.”

Choose to mentally prepare a game plan for each opponent so you can feel confident you have a good game plan.