Video Mental Coaching from Anywhere in the World - LEARN MORE!
You are here: Home / Tennis Psychology Articles / Nadal on the Importance of Positive Body Language 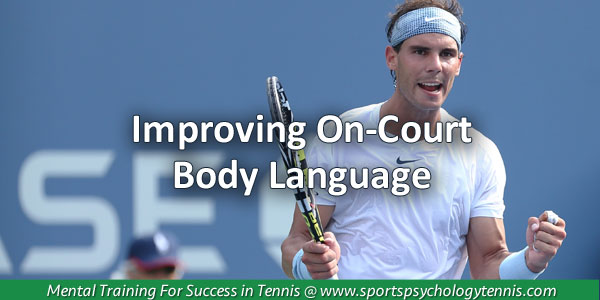 All athletes know the importance of positive self-talk. What you say to yourself sets up how you perform in tough moments.

If you beat yourself up on the court, that negativity will manifest itself in mistaken-ridden play in matches.

While self-talk is critical, athletes communicate how they feel in another significant way… body language.

Your body sends powerful messages to your brain that affect your level of competitiveness and play on the court.

It also tells your opponent that you are upset or frustrated.

All negative language leads to anxiety, frustration and under performance, so you must be vigilant as to the messages you are sending to yourself.

Rafael Nadal pays particular attention to his body language, especially during his dominant run to his 16th Grand Slam championship.

Nadal won his third US Open title by defeating Kevin Anderson in straight sets, 6-3, 6-3, 6-4 while hitting 30 winners and only11 unforced errors.

Even though Nadal won the final in convincing fashion, the victory marks the first time in Nadal’s career in which he has rallied from a set down in three matches en route to a title.

Nadal appeared calm throughout the Grand Slam final, even though there were a few deuce games and break points in the first set.

There are a couple of takeaways from Nadal’s statement:

If you want to play at your peak, you need to arm yourself with the right equipment which includes the right attitude and mindset.

If you learn to master how you conduct yourself on the court, you will be able to keep your emotions in check and regulate the level of nerves you experience in competition.

First, identify specific types of negative body language that you engage in during tennis matches, such as head down or slumping shoulders.

Next, identify when you have negative body language most often.

Is it after losing a set or after hitting several shots long? Look for the common scenarios that triggers these negative body behaviors.

Lastly, choose an alternative and positive behavior. For example, “When I hit a shot long, I will take a deep breath, lift my head and pull my shoulders back.”

By being conscious of the messages you send yourself, you can replace those messages with more positive and self-enhancing messages.

Learn all my strategies for better on-court composure: