Video Mental Coaching from Anywhere in the World - LEARN MORE!
You are here: Home / Tennis Psychology / How to Bounce Back Stronger After Injury 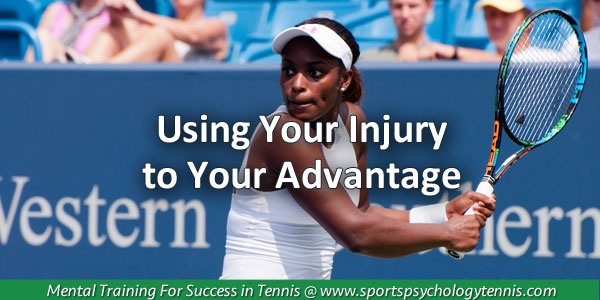 Injuries are an unavoidable part in sports…

No sport is exempt from the injury bug, including tennis…

Tennis elbow, back strains, Rotator cuff issues, ankle sprains and patellar tendonitis are common injuries experienced by many players. Some of these injuries will prevent you from playing tennis for short or long periods of time.

Ironically, most tennis players find the mental strain from not competing can be far greater than the physical pain.

If you constantly dwell on the negative while injured, you will slow the healing process as well as hurt yourself mentally.

Staying positive while not competing in competitive matches has several benefits:

Taking an injury timeout doesn’t mean it’s the end of the world and, with the right attitude and some work, an injury hiatus may actually jump start your tennis career.

After the 2016 Olympics, Stephens suffered an ankle injury which caused her to withdraw from the US Open, undergo surgery and sidelined her for a period of ten months.

Stephens has played some of her best tennis at the 2017 US Open and will surely see her ranking rise after advancing to her first US Open quarterfinal and her first quarterfinal at a Grand Slam since Wimbledon in 2013.

Upon returning to competitive tennis, Stevens has demonstrated a greater sense of composure, calm, mental toughness and a renewed enthusiasm for the game.

Stevens turned around a bad situation and found a way to use that injury time to her advantage.

STEPHENS: “I obviously wasn’t happy to get injured. That’s not anything that I ever wanted but it was a good lesson for me. It was a good time to be able to take a break, get my health in order [and] then reevaluate my whole entire situation—come back a better player and better person.”

Injuries stink… but if you use your time to reassess and come back stronger, you might be more mentally tougher and stronger than before injury.

Using Your Injury Timeout to Your Advantage:

Instead of whining about everything you cannot do while injured, find the things you can do to improve your tennis game.

Each week, create one goal you can work towards while not competing.

For example, your weekly goal may be:

Use your injury timeout to refresh and reset both your mind and body.

Pick a your copy of “Tennis Confidence” audio and workbook program so you can come back with a renewed mindset: