Video Mental Coaching from Anywhere in the World - LEARN MORE!
You are here: Home / Tennis Psychology / Andy Murray’s Olympic Win Without His A-Game 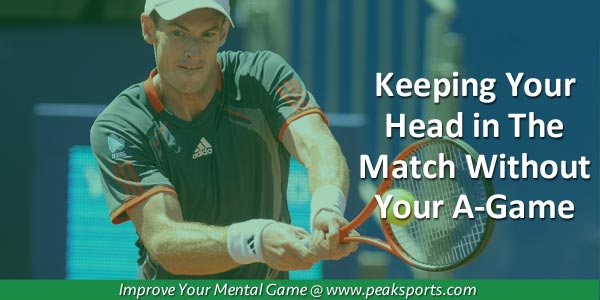 Winning Tennis When You Don’t Have Your A-Game

You know it’s hard for athletes to perform at a high level week in and week out.

Injuries, being tired or sick, technique flaws, a string of losses or bad weather are factors that may affect how well you play in a match.

Many tennis players, if they are not firing on all cylinders early in a match, will feel less confident and decide not to fight through…

“Why give maximum effort today if I just don’t have it… I will lose anyway.”

But you certainly don’t have a crystal ball. No one can predict with 100% accuracy how a match will end.

Maybe your opponent hasn’t done the training necessary to fight through a long match.

The outcome is determined at the end of the match, unless you mentally bow out early. So if you want to win more matches, you need to be mentally tough when you are not on top of your game.

Andy Murray won the gold medal at the 2016 Rio Olympics despite not being on top of his game.

Murray had a tough road to haul since his last Olympic gold medal in London.

MURRAY: “It hasn’t been easy, because a lot can happen in four years, especially for tennis players. We have so many events. Since London, I had back surgery. My ranking dropped a lot during that period, and I’ve gone through some tough times on the court as well.”

Heading into Rio, Murray already wasn’t on top of his game but that didn’t stop him from competing and fighting for each victory until he made it to the gold medal match.

Murray displayed his grit and mental toughness in the finals at the Rio Games when he faced Argentina’s Juan Martin del Potro and defeated him in a hard-fought match 7-5, 4-6, 6-2, 7-5, to defend his Olympic title.

Even though Murray had 45 unforced errors, was broken six times and put only 51 percent of his first serves in play, he consistently retrieved balls that seemed un-returnable and hit them for winners.

Murray’s mental toughness carried him through despite not playing his best tennis.

MURRAY: “I was tired. We played four hours. It was humid and a slower court. I didn’t serve well, so that made it tougher. I had to find a way to get through it.”

Murray is now the first tennis player in history to win back-to-back singles gold medals, an accomplishment that would have never been achieved if he decided to just pack it in because he felt he didn’t have it.

How to keep your head in the match when you are not on top of your game:

Sometimes you have a grind out a match when your don’t have your A-game. Focus on your level of effort and winning points, not the fact that you don’t have it today.

Don’t assume that you will lose the match even though you only have your B-game. A lot can happen during a long match–as we have seen at the 2016 US Open this year.

Effort begins with the mental decision that you will not let your circumstances beat you.

Staying mentally tough and fighting for every point can be the game changers you need to succeed. And it can be even more gratifying to win when you are not at your best.

Learn all my secrets for mental toughness strategies in tennis!

Learn Proven Strategies To Perform Your Best On The Court!

Are you (or your players) performing up to your ability in competition?
Do you bring your best and most confident game to matches?
Successful tennis players have learned how to perform with ultimate confidence in tournaments.
If you are ready to improve your mental toughness and perform wiht ultimate self-confidence in matches, Tennis Confidence: Mental Toughness For Tournament Players can help you do this!
Use Tennis Confidence to help boost your mental toughness in tennis and discover powerful and proven mental game strategies that have helped professional athletes win!
Tennis Confidence: Mental Toughness For Tournament Players

What are customers saying?

“I want to let you know that your Tennis Confidence CDs have been extremely helpful to me.  I listen to them in the car, and the program is helping me overcome a lifetime of tournament performance anxiety.  Thank you!”
~Wing Wu

What are our students saying?

“I just returned from Rio for the Olympic tryout, the Fearless Athlete 14-day Program helped my greatly. I did not have this help at the Pan Am Games. I wish I did then, thanks again I will be getting more of your programs on line.”
~Tony Maraj, Olympic Athlete

This workbook series was designed for coaches and mental coaches to use with their athletes.

For mental coaches, this system is ideal for between session education.

What are coaches saying?

“I am impressed with the willingness and openness of Dr. Cohn to share all of his assets (intellectual, products, etc.) with the MGCP students. You have developed an incredible model/package for mental training. Even though we are paying for your service, you are passing on a legacy built on your contribution to the world of sports. Thank you for that.”
~Tony Melito, MGCP