At the 2015 Australian Open, Andy Murray suffered one of his biggest psychological meltdowns in his career during the final match…

Was Murray out-matched or did a mental factor contribute to Murray’s meltdown?

Often psychological meltdowns are caused by an athlete losing his focus. Murray seemed to be distracted during the third set focusing more on his opponent.

Early in the third set, Djokovic appeared to suffer from exhaustion and cramps but miraculously recovered to dominate and win the third and fourth sets.

Djokovic seemed to feign his injury and exaggerated his symptoms possibly to disrupt the focus of Murray… and it seemed work.

Murray stated he lost his focus while Djokovic performed his antics:

MURRAY: “The third set was frustrating because I got a bit distracted when he [Djokovic], like, fell on the ground after a couple of shots. It appeared that he was cramping, and then I let that distract me a little bit. That’s what I’m most disappointed about.”

In his post-match interview, Murray tried to elaborate on the cause of his scattered focus:

MURRAY: “I think, the way he [Djokovic] was moving at the end of the third set, he started playing much better again [alluding to the possibility of feigning his injury]. That contributed to some of it… Maybe it was the situation that you know if someone’s cramping in the final of a slam, with such a long way to go, you’re feeling pretty good about yourself. Yeah, maybe, like I said, I dropped off for 10, 15 minutes there, and he got back into it.”

Murray also spoke of the importance of focusing on yourself, your strategy for each point and your game but also talked about the difficulties of staying focused:

MURRAY: “In all matches you concentrate on your own end of the court. That’s just a basic thing to do. Sometimes when you play, like here and the US Open, because they have replays after every single point, you’re often waiting before you serve whilst they’re showing the replay. It’s very difficult to not be aware of what’s happening down the other end.”

There is no doubt that focusing during matches can be difficult. The benefit of mental training is learning effective strategies to improve your focus and consistency on the court.

Try these tips to improve your competitive focus:

Pay attention to your mental game by finding a mental coach that can help you with your match focus and confidence. 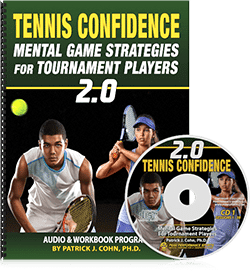