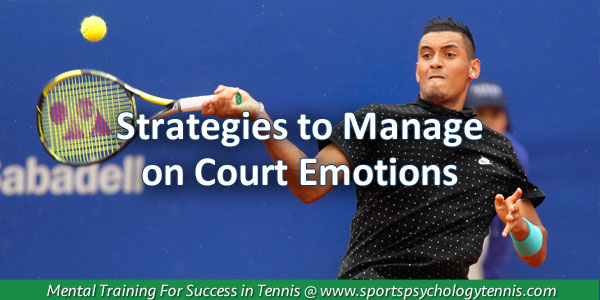 Beating yourself happens when you lose control of your emotions or when you allow frustration to lead to rushing or even tanking.

Many in the tennis world refer to this as a mental meltdown.

Mental meltdowns can include:

Mental meltdowns and runaway emotions have negative consequences and pretty much guarantee a loss or bad reputation.

Kyrgios’ resume of meltdowns is extensive. Kyrgios’ talent is unmistakable, but, due to all those meltdowns, Kyrgios has not been able to live up to potential.

In his semi-final match at the 2017 Miami Open against Roger Federer, Kyrgios not only lost control of his emotions, he lost match he had a chance to win.

As Kyrgios served at 5-4 in the deciding tie-break, needing only two points for victory, a rowdy fan yelled “out” as Kyrgios set up for a difficult forehand shot from behind the baseline.

Kyrgios shanked the shot well wide and then the meltdown started. Kyrgios was furious as he started cursing at the fan and yelling at him to shut up.

Most tennis players in that position, with a victory in near sight, would be angry, but Kyrgios seemed enraged. The biggest problem for Kyrgios was his runaway emotions causing him to dwell on a past point.

Kyrgios could not calm down or regain his composure and focus. Kyrgios allowed his negative emotions to dictate how he finished the match.

Kyrgios double-faulted on the next point, and then Federer secured the victory with an ace winning the match 7-6, 6-7, 7-6.

As Federer celebrated, Kyrgios decimated his racket by pounding it on the court repeatedly.

Kyrgios had a similar meltdown at the Australian Open where he was penalized a point for his second code violation (swearing and a racquet slam).

Kyrgios must learn to control his emotions if he is to be successful as a tennis player. He admitted that finding a coach may help him manage his emotions more effectively in the heat of battle.

KYRGIOS: “I think it’s mental. The mental side of things is big for me. That’s where a coach would be good.”

Try this tip to manage your intense emotions during tennis matches:

Since you can’t control what happens to you in a tennis match, you have to learn to control your emotions.

One effective way is to talk yourself down from the ledge…

“Take a deep breath. That point is done, let’s get back in the game. I still have another point to play, another chance. Let’s go for this point.”

With some practice, you can learn to let go of the last point or game and not allow negative emotions to change your game.

Tell yourself that only the next point or game matters and get on with it without thinking about how unfair or unfortunate the last point or game was.

Get all my mental game strategies for winning tennis here.

“Thank you for all the knowledge, tools, material, and guidance you have given me throughout this course.  It was truly a great experience.   I am looking forward to integrating this mental training system not only to students at the club, but as well bring this wonderful education outside to athletes that truly are committed, and strive towards reaching their peak performance.”
~Tim Whitehead, Head Tennis Professional, MGCP

What are tennis players and sports parents saying?

What are our mental coaching students and parents saying?

“Danielle did really well with controlling her emotions during the matches today. We were very proud of her for not showing her frustrations during the match; I think that was a big accomplishment. She really looked in control of her emotions even when she double faulted or made mistakes. The changes we saw on Danielle’s behavior in less than 24 hours were AWESOME! Thank you for your guidance!”
~Jennifer, Tennis Parent