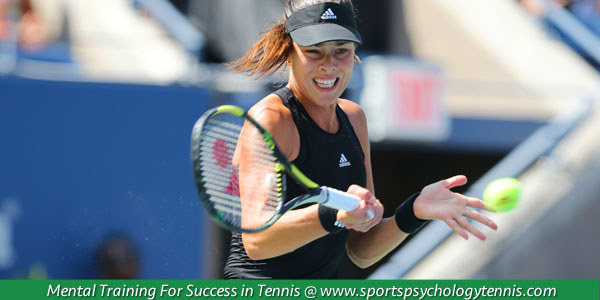 Tips For Releasing The Grips Of Pressure

Why do some players place so much pressure on themselves to win?

Has placing pressure on yourself ever helped you win a match?

Most tennis players falter under the weight of self-imposed pressure.

Pressure is self-sabotaging… It would be like eating double cheeseburgers five minutes before a match… Excessive pressure is unhealthy, unproductive and causes you to underperform.

Imagine if you played with a “nothing-to-lose” mentality? If the excessive pressure of needing to win actually causes you to play poorly, then why not try the opposite?

A “nothing-to-lose” mentality is one where you let go the results and just go for points.

Going for it, without fearing failure, is the only mentality that gives you a chance to play to your potential.

China’s Zhang Shuai, No. 133, understands all about the negative aspects of pressure. Zhang placed so much pressure on herself to win that she considered retiring from tennis at the end of last season after posting a career 0-14 mark in Grand Slam matches during her nine-year career.

ZHANG: “[Last year], I actually didn’t want to go compete. I was scared of playing. I just didn’t want to play. I even felt like I should just go and lose as quickly as possible.”

Entering the 2016 Australian Open, Zhang wasn’t sure how much longer she would play, so she adopted a “nothing-to-lose” mentality.

Yes, easier said than done for many players…

Zhang lessened the pressure by not worrying about the results, as if she was telling herself, “Whatever happens, happens.”

ZHANG: “I tried to treat this like it was the last match of my life. I think I did a great job. Zhang would rather not think about her next match.”

Zhang has been focused on being the best she can be, instead of trying to be a “Serena” or a “Sharapova.”

ZHANG: “I want to show the best of Zhang Shuai. I think I did a great job today.”

The dire need to win actually detracts from your confidence because you are more focused on the fear of making mistakes. It’s a mindset that produces a lot of tension and anxiety.

Zhang’s confidence has skyrocketed as she’s focused on playing in the present and has re-discovered the joy of playing tennis.

ZHANG: “No more nervous for me because I already play six matches in this court this tournament. I’m enjoying the tournament right now.”

Tip for releasing the grip of pressure:

Think if you were to grip your tennis racquet as tight as possible… your forearm would tense rendering you incapable of making the shots you normally make. Motocrosss athletes call this “arm pump.”

Excessive pressure has the same effect on you mentally… The “I must win” mentality causes you to play tense and nervous.

Recognize the symptoms you experience when under excessive pressure: nervous, tense muscle, inability to focus, fearful of making mistakes, etc.

When you feel that sense of pressure build up, ask yourself, “Why am I doing this to myself?” Write the letters NTL on your racquet which stand for nothing to lose” and remind yourself that your best chance to play well is to let go of those excessive expectations you place on your game.

Just go for it… what do you have to lose?